Vanguard Report: Drug development and the tension between access and excess

To celebrate our 50th anniversary, we’re inviting a select number of experts to share what they see as being the 21st-century solutions to one of the biggest and most complex challenges of our generation: antimicrobial resistance. In this post, Santanu Datta explores the future of drug development and the tension between access and excess… 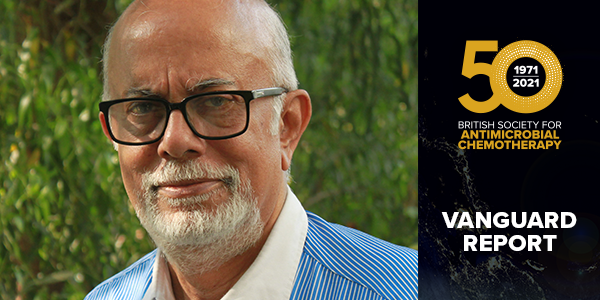 Prof. Gupta (name changed) is a friend of mine from my college days; he became a physicist while I dabbled in the world of microbes and drugs against them. One morning, he called me in anguish – his two-year-old grandchild was in the ICU with septicaemia. Most antibiotics had failed, and that is why he was reaching out to a friend in the antibiotic discovery world for help. The need was urgent, and the doctors did not have time to even identify the microbes, let alone characterise their resistance profile. What value is my explanation to him that the Bugworks drug is still under development and not ready for use? The infant did not survive, leaving everybody in despair.

Antibiotics are primarily of two kinds: broad‑spectrum that kill most bacteria and narrow‑spectrum that target a specific group of bacteria, as their classification suggests. Broad-spectrum antibiotics include both Gram-positive and Gram-negative bacteria in their scope.  Antibiotics like the fluoroquinolones fall in the class of broad spectrum. In contrast, antibiotics like vancomycin and linezolid fall in the narrow-spectrum category as they are effective only against Gram-positive bacteria. However, these definitions are becoming increasingly arbitrary. The rise of antibiotic resistance is eroding the activity of traditionally broad-spectrum agents. In some settings, even the carbapenems, a potent class of traditionally broad-spectrum agents, are currently used as partial-spectrum antibiotics, since they are ineffective against some WHO listed critical pathogens.

There are hardly any antibiotics that act only against Gram‑negative bacteria.  With the emergence of antimicrobial resistance (AMR), microbe-specific antibiotic activity has become a subject of intense debate. Ideally, a patient suffering from a urinary tract infection from E. coli should be treated with a mono-spectrum antibiotic that kills only the pathogenic E. coli and induces no collateral damage to the commensal gut, mucosal and skin bacterial flora. A significant problem with antibiotic treatment is the so-called fallout of “dysbiosis”. Our gut microbiome is a mixture of numerous Gram-positive and Gram-negative bacterial species and is central to our overall wellbeing. The alteration of the composition and the ratio of bacteria is called dysbiosis. During antibiotic therapy, the balance of microbes is disturbed, leading to problems of the digestive tract and the immune response. Most antibiotics are significantly more potent against Gram-positive bacteria than Gram-negative bacteria. The relative lack of potency in Gram-negative bacteria is accentuated by their rugged outer membrane and efflux pumps. The double-layer membrane structure and robust outer surface, consisting of a dense matrix of lipopolysaccharide, often prevents the entry of harmful antimicrobial molecules. Besides, a wide array of efflux pumps, such as RND (resistant nodulation division), specifically operate in Gram-negative bacteria and actively throw antibiotics out of the cell. Most antibiotic treatments would then cause dysbiosis. From rheumatoid arthritis to colorectal cancer, various diseases are conjectured to result from acute dysbiosis of the gut microflora. One of the arguments in favour of monospecific antibiotics emanates from this fallout.

The question really is whether a pathogen-specific therapy is scientifically possible to design and operate. Whether Gram-negative or -positive, most microbes have about four to six thousand genes, of which only ten per cent are essential. Though there are several hundreds of potential antibiotic targets, the number of clinically validated targets are only a handful (perhaps ten to twelve) in number. The specificity and potency of antibiotics towards a particular class of pathogens are often driven by cell entry barriers and efflux efficiency rather than target specificity. The target of the antibiotics like rifampicin and linezolid are RNA polymerase and the ribosome, respectively. Although these two targets are universally conserved amongst bacterial species, these antibiotics are ineffective against Gram-negative bacteria due to their inability to enter the bacterial cell, or because they are thrown out by efflux pumps. Some Gram-negative bacteria, like Neisseria meningitidis, N. gonorrhoeae, and Hemophilus influenzae are partially sensitive to rifampicin, while linezolid has no activity against Gram-negative bacteria. Recent studies indicate that antibiotic treatment for tuberculosis induces a profound dysbiosis of the microbiome that persists long after therapy is completed. Amongst the multi-drug therapy (the regimen is more than three decades old), rifampicin is thought to be the culprit; the other drugs – ethambutol, pyrazinamide and isoniazid – are specific anti-tuberculosis agents. The successful outcome of the clinical trial with the novel combination of bedaquiline, pretomanid and linezolid for treatment of extensively drug-resistant pulmonary tuberculosis has given hope in this therapy area.

The paucity of treatment options in the therapy area of infection is universally acknowledged. There has been a renewed global awareness of the dearth of new antibiotics following Lord O’Neill’s AMR Review predicting the possibility of 50 million deaths by 2050 if no new antibiotics are discovered. These numbers should have been an opportunity for drug companies that discover, make, and sell new antibiotics. However, there has been a bankruptcy run among pharma companies, especially the small and medium enterprises that have “successfully” launched new antibiotics into the market. This opposing track of market failure despite the unmet need and global demand is akin to a riddle transfixed in an enigma for the uninitiated. How should drug development companies respond? From the clinical point-of-view, some might argue that what is needed is a novel broad-spectrum antibiotic that can be prescribed empirically before microbial sensitivity is known. In an ICU, a struggling patient with a life-threatening infection often does not have time. The microbiological deciphering of the bacterial species and its antibiogram usually takes 24 hours or more. In developing countries like India, where the infrastructure is often limiting, the doctor’s time pressure to prescribe antibiotics is often higher. At such a juncture, mono, narrow or partial spectrum antibiotics will not suffice. The only solution is a novel broad-spectrum antibiotic. In contrast, in the community, say for targeting gonorrhoea, a specific narrow spectrum antibiotic would suffice.

The bankruptcy of various small and medium-sized antibiotic discovery companies and the closure of antibiotic research and discovery in much of big pharma has come as a double whammy in the backdrop of the unmet need and the lack of novel broad-spectrum antibiotics. It should be noted that none of the recent new antibiotics that failed to unlock the market riddle was indeed a broad-spectrum molecule. None that could have saved my friend’s grandchild. Unless we have reliable diagnostics that identify the bacteria and its antibiotic sensitivity under two hours, antibiotics that are not broad-spectrum will not make any marketing dent. One of the central tenets of the Hippocratic Oath that bind all doctors worldwide is “to treat the ill to the best of one’s ability”. Using anything less than the best broad-spectrum drug could lead to unnecessary death, especially when there is no diagnostic to suggest otherwise. This approach might be deemed controversial as it might accentuate indiscriminate use antibiotics that goes against the sane thought that drives antibiotics stewardship. It should be noted that clinicians around the world are often at crossroads specifically in high AMR load countries about this dilemma. Without a proper antibiotics resistant profile prescribing an ineffective antibiotic is not only bad for the patient as it worsens the AMR load, but it also increases the prevalence of resistant bacteria in the community. The phrase “dead bugs don’t mutate” is an apt aphorism, graded antibiotic regimens that are often practiced might need a rethought.

The current thought process to stem the antibiotics draught hinges on the passing of the PASTEUR act by the United States Congress. At the heart of the PASTEUR Act is a “delinked” subscription program that moves away from volume-driven payments. A “critical need antimicrobial” drug sponsor will instead receive payment of “not less than $750,000,000 and not more than $3,000,000,000” in exchange for patient access to the drug through Federal health programs at no cost. We strongly believe that coupled with this federal push, the market pull for multiple novel broad-spectrum antibiotics is high and more research should be focused on their development.

Santanu Datta is currently the CSO of Bugworks Research in Bangalore. Bugworks focus in on discovery and development of novel broad spectrum antibiotics.  Santanu was previously Vice President, Drug Discovery and Industrial Biotechnology at Cellworks Research India Pvt. Ltd where he led the building of the in-silico platform for E.coli and M. tuberculosis and its experimental validation. Prior to this, he was the Principal Research Scientist in AstraZeneca India, where he spent more than 2 decades working in Infectious diseases, with a focus on Malaria and MTB. At AstraZeneca, Santanu scientifically mentored programs across the discovery pipeline and pioneered many ground-breaking concepts such as those of gene and chemical vulnerability. He has served as Principal Investigator in several prestigious research grants from Wellcome Trust, European Union Framework programs and the Department of Biotechnology, India. His current interest is in systems biology and its application in anti-infective drug discovery and in Industrial Biotechnology specifically the interface between insilico and experimental biology. He has published widely and has thirteen international patents. Santanu, received his Ph.D. from Calcutta University in Biophysics in 1981 and was trained as a molecular biologist during his post-doctoral stint in Indian Institute of Science, Baylor College of Medicine USA and Karolinska Institute Sweden.

Dr Datta has described the conflict faced by those involved in antimicrobial drug development. Should they concentrate on the development of narrow spectrum targeted treatments for single organisms, which is what the infection specialist say is needed to combat the development of resistance, or do they try to develop the next broad spectrum blockbuster, which is what he argues is needed on the ICU in many areas of the world? The risk is clearly that this will be used indiscriminately and encourage the development of further resistance and limit its useful life. Infection specialists would rather the new agent is put on the shelf for use only when absolutely needed, but this may not be economically viable.

How do we stop this from happening? We can continue to develop the tools that are needed for stewardship of new antimicrobial agents. As Dr Datta writes, these include rapid diagnostics to try to mitigate the need for empirical prescribing wherever possible. We can also build on the approach being taken by the current pilot UK drug reimbursement model and initiatives such as the proposed PASTEUR Act in the US, where a combination of push and pull incentives are intended.

Evidence that these incentives work is clearly needed. It has taken time to get the reimbursement initiatives off the ground and the market has moved on. We are already seeing some new beta-lactam/beta-lactam inhibitor combination drugs being recommended in antimicrobial treatment guidelines for empirical use.  It is increasingly difficult to argue against this for parts of the world where the majority of organisms causing infection are resistant to everything else. Yet, how long before these drugs are also in the discard pile of agents that are no longer active?